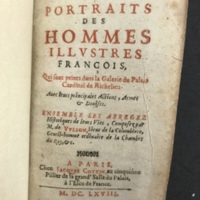 The images of the exhibit come from Les Portraits Des Hommes Illustres François, a book published in 1668. Marc Vulson, the author, hired François Bignon and Zaquarie Heince to engrave the illustrations, and Jaques Cottin printed it. The book tells the histories of famous French men whose portraits hang in the gallery of the palace of Cardinal Richelieu. 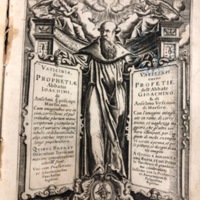 Content of manuscript are prophecies in latin and italian regarding popes and papacies, accompanied by illustrations on the subjects. 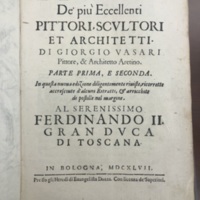 This exhibit displays a small sampling of images from a 1647 edition of Giorgio Vasari's Le vite de' più eccellenti pittori, scultori et architetti. With this book, Vasari created the first collection of biographies of artists and is considered by many to be the father of Art History. The title page, frontispiece, two illustrations, and colophon are featured in this exhibit. The first illustration is of Properzia de' Rossi, a Bolognese sculptor and the only female artist to be featured in Vasari's book. The second illustration of is Vasari, himself, who was not only a writer and biographer but also an artist. 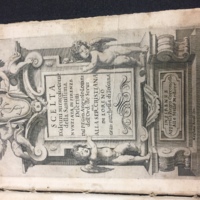 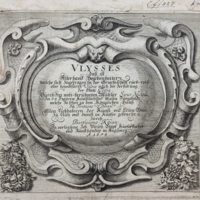 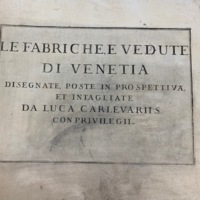 This Exhibit features six pages from Lucas Carlevarjis's, "Le Fabriche, E Vedute Di Venetia." This book is a series of Prints of different sites of Venice. While the artists for each of the prints have not been mentioned the publisher of this book is Lucas Carlevarjis. He published this book, in dedication to the Doge of Venice in 1703.

The items that this exhibit includes are the Title Page, Dedication Page, Paste Down Page and the first, third and fifteenth pages of the book. These pages give us the information about the title, when it was made, who it was made by, who it was made for and examples of some of the prints which are focusing on the views of churches in Venice.

Blome, “Britannia: or, A geographical description of the kingdoms of England, Scotland and Ireland” 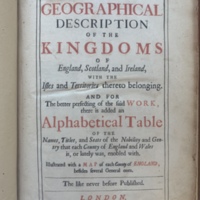 Published in 1687, this books is a geographical account and recording of familial terretories in England, Scotland, and Ireland, including maps and coats of arms. Each coat of arms is represented in a physical territory within the maps of the book.

Full Title of the work:

Britannia: or, A geographical description of the kingdoms of England, Scotland and Ireland, with the isles and territories their to belonging: and for the better perfecting of the said work, there is added an alphabetical table of names, titles, and seats of the nobility and gentry that each country of England and Wales is or lately was, enabled with: illustrated with a map of each country of England, besides several general ones.