A Collection of Very Valuable and Scarce Pieces Relating to the last Plague in the Year 1665 (London, 1721) is a book which includes a collection of documents relating to the plague in London.  This book was used to help prevent future diseases from being as destructive as the plague was in London during the late-sixteenth and seventeenth centuries.  The first chapter includes orders made by the Mayor Lord of London that were meant to help prevent the spread of disease.  This section includes instructions on when to report illness, how to handle sick patients and their belongings, as well as other orders the Mayor believed would be effective in containing the spread of disease.  The second section of the book includes personal accounts from Dr. Hodges on different symptoms as well as his experiences with the disease. The third section presents remedies and possible cures for the plague.  The book also includes the weekly bills of mortality for three different bouts of plague that hit London.  The final part of this book includes an account of the Plague of 1665 in Italy.  This book is a compilation of different documents on how to handle disease. 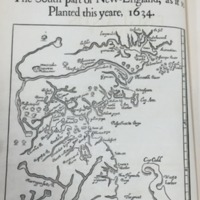 This exhibit looks at the book New England's Prospect by William Wood.  The book itself was written as a travel guide in 1635 for anyone that might be interested in traveling the northeastern United States.  It gives some information on weather, animals, fruits, herbs, and Native Americans.  The focus of the first half of the book centers on the wildlife and environment of the northeastern United States.  Wood describes what herbs are good to eat, as well as when it is the best time to hunt dear.  He then goes into detail on each individual town, and even gives some insight into a number of Native American communities.  In the second part, Wood gives some insight into Native American language and tradition.  Wood takes the time to look at each individual tribe, as well as their traditions, political structures, and religious practices.  In the last few pages, Wood offers a number of translations so as to improve the travelers’ ability to interact with the indigenous peoples. It gives the reader a large amount of information and assumes that they have no background in the region before opening the book.  However, New England’s Prospect differs from a normal piece of travel writing in a number of ways.  Firstly, it assumes that the reader has the intention of going to New England and actually utilizing the text as a guide.  Secondly, it gives almost no personal background and insight throughout the text.  While Wood does mention a select number of anecdotes, he does not couch the text in story. In many ways, it is written like a contemporary travel guide, such as Lonely Planet.