This illustration on the Marsh Harrier, like the other images in this book, accompanies the chapter on the respective bird. In the illustration, the bird seems to be standing on a flat surface and peering down into the distance. Although in the images in this book there are no interactions between birds and nature, we are able to see a minimal semblance of environment. Thus, the focus is not on the Marsh Harrier in nature, but the body of the bird itself. Like the Peregrine and Bearded Tit, the Marsh Harrier seems proportional and the portrayal of its features is realistic. 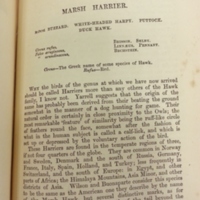 The chapter on the Marsh Harrier covers pages 117 to 121. It opens with the bird’s nomenclature, breakdown of the meaning of the scientific name, and key phrases such as “white-headed harpy” and “duck hawk”. Morris writes of nomenclature significantly in his work and seems to be interested in how the terms that define and differentiate these birds come about. Hence, he opens this chapter by discussing the genus term “Harrier” and its plausible origin, weaving history and science together in an account of nature. Thus, Morris’ work on natural science was influenced on subjects outside the realm of science, such as history and his inescapable ties to religion since he dedicated his life to being a reverend. In describing the birds he writes on, Morris draws from other sources that discuss firsthand experience or observation with these birds. He even cites a then new theory on the Marsh Harrier, ending the chapter on the question of the intermingling of species.