"The Present State of the Ottoman Empire. Containing the Maxims of the Turkish Politie, the Most Material Points of the Mahometan Religious, their Sects and Heresies, their Convents and Religious Votaries, their Military Discipline, with an Exact Computation of their Forces both by Land and Sea.

Illustrated with diverse pieces of sculpture, representing the variety of habits amongst the Turks.

By Paul Rycaut, Esq; Secretary to his Excellency the Earl of Winchilsea, Embassador Extraordinary for his Majesty Charles the Second, to Sultan Mahomet Han the Fourth, Emperour of the Turks.

London, printed for John Starkey and Henry Brome, at the Mitre between Middle-Temple-Gate and Temple Bar in Fleet-street, adn the Star in Little-Britain. 1668."

The names are italicized in the text.

The text is accompanied by an image of Sultan Mahomet. The print is captioned by the following: "Sultan Mahomet Han the present Emperour of the Turkes aged 23 yeares Anno 1666."

There is reconstruction detail, showing evidence of previous wear. A detail shot is provided, on both pages. 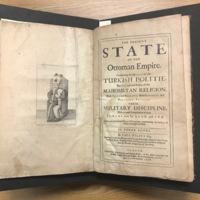 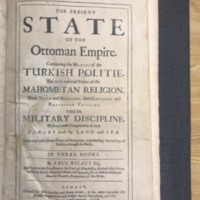 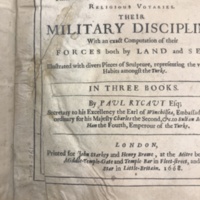 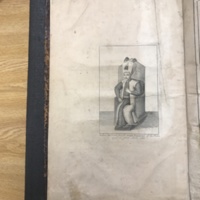 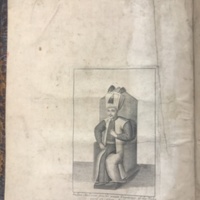