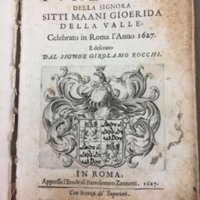 Pietro della Valle was a famed as traveler, poet, musician/composer, linguist, and academician from a Roman noble family who traveled with his wife, Sitti Maani Gioerida, for many years until her death in 1621. After her death, Pietro della Valle had her body mummified and continued to travel with the corpse until his return to Rome in 1626. Upon his arrival, he organized a grand funeral procession. This pamphlet, which commemorates her funeral, includes her portrait, seal, and motto as well as more than thirty poems written by Umoristi academy and dedicated to Sitti Maani Gioerida.