Nature and Knowledge in F.O. Morris' A History of British Birds 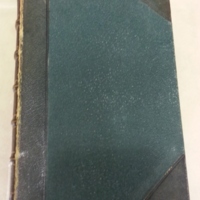 Volume I of A History of British Birds by Frances Orpen Morris was published in 1862 and reflects the motif of classification in natural history. Morris, born in 1810 in Ireland, was not educated to be a scientist but actually a reverend, yet his interests ranged from naturalism to etymology to biblical studies. This particular work was completed during a time when scientists were fascinated by classifying and identifying species and thus the text elucidates how nature was observed and documented in the nineteenth century. In this work, the subject matter is limited to British birds, yet Morris provides nuanced and detailed insight into the birds’ environments, physical appearances, diets, life cycles, and other factors. Each chapter in this book commences with a realistic illustration of the bird for the respective chapter seemingly drawn from observation. Unlike works documenting nature in previous centuries that infused the mythical with the real, this work is grounded in fact and observation, whether Morris actually observed these birds or cited sources that did. His accounts and descriptions of birds heavily cite other sources and include theories of his own, illustrating the quest for documenting and synthesizing knowledge on nature at this period in history. Therefore, Morris’ A History of British Birds illuminates the classification of natural knowledge in 19th century Europe.

A History of British Birds, History 96, Morris, Nature and Knowledge

Musaeum Regalis Societatis, or, A catalogue & description of the natural and artificial rarities belonging to the Royal Society and preserved at Gresham Colledge

“’Musaeum Regalis Societatis’, or, A catalogue & description of the natural and artificial rarities belonging to the Royal Society and preserved at Gresham Colledge” was written by Nehemiah Grew in 1681.  It is a combination of two writings, the categorization of the Royal Society’s rarities and the lectures given by Grew at Gresham College on the comparative anatomy of the digestive system of various animals.  The curiosities are categorized in four sections: animals, plants, minerals, and artificial objects. The Royal Society acquired the specimens through various donors.  The artificial objects section is significant because they presented new innovations gifted by their inventors.[1]  The second section of the book “The Comparative Anatomy of Stomachs and Guts” is a series of lectures and images comparing and contrasting the anatomical structure of multiple species.[2]

Nehemiah Grew was born in 1641 and became a notable physician and botanist.[3]  He became the appointed co-curator to the Royal Society in 1672 with Robert Hooke, who was responsible for lectures and demonstrations.  Grew began cataloging the museum of acquisitions in 1678 and finished one year later.  In addition to cataloging the Museum, Grew wrote various publications on plants and anthropology, including his greatest work “The Anatomy of Vegetables.”[4]