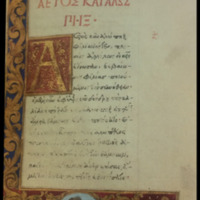 The Aesop's Fables are referenced in many well known works from Antiquity.  The series of fables, as well as their alleged author, are cited by Herodotus, Plato, and Aristotle in their works on political, religious and social philosophy.  The geographical origins of the fables is often up for debate with differing camps arguing provenance from the Far East or Western Asia.  Most present day version written in Greek are said to be catalogued from the author, Babrius (2nd century AD).

The history of the original Esopo Medici from which this codex is copied is as rich and colorful as the manuscript itself.  Subsequently referred to as Ms. Spencer 50, it is qualified as "a truly sumptuous manuscript, obviously made for a highly placed client of prestige," (Labriola). Thought to be commissioned by Lorenzo de Medici in or around 1480, Ms. Spencer 50 was transcribed on vellum in Greek and accompanied by beautifully illustrated miniatures depicting the fable.  It was originally transcribed and bound together with another work attributed to Aesop, Life.  As noted in subsequent sections, the Greek script has been attributed to the famed Cretan scribe, Demetrio Damilas and the miniatures are thought to be the work of a team of miniaturists and illuminators in the workshop of Francesco di Antonio del Chierico.  The frontispiece of the Fables is attributed to Mariano del Buono.  The illustrations themselves are the major selling point of Ms. Spencer 50 and lend to its historiographical significance as this codex is believed to be the first transcription of the Fables that included such elaborate illustrated depictions of the tales.  In fact, prior to Ms. Spencer 50, all other versions of the Fables were used solely for educational purposes in schools.

Although the manuscript has been well preserved it has endured some general damage. At its origination, Ms. Spencer 50 contained 147 fables but in its current state only 135 have been preserved with five missing pages, seven missing fables, and five incomplete fables.  There is also the presence of moderate water damage to the folios in the second half of the codex (36r-75r), luckily avoiding the superbly preserved miniatures which set this manuscript apart from other compilations.

Primary Source: Esopo Medici. Facsimile Edition of a manuscript written in Greek from the New York Public Library, Spencer Collection. Written by Demetrio Damilas; illuminated by Mariano del Buono and the Master of the Hamilton Xenophon.  Florence, copied from the edition printed by Bonus Accursius at Milan ca. 1480. <http://library.tufts.edu:80/record=b2411880~S1>